The heat of flame and the cool of discipline

Rongo is a man of slightly above average height with a lean-muscled build and observant eyes. His forty something years have had little negative impact on his body, but his longer years of experience with the spiteful and foolish tendencies of people have made him wary and cautious, verging at times on paranoia. He has been charged with the responsibility of military commander for the Champions of the White Lotus, but seldom uses his rank; these kids need no help eliminating the enemy.

Rongo spent his youngest years training with the sword at a dojo in The Land of Earth that was under the control of the Fellowship of the Imperial Order. When the town came under attack by an opposing faction, the adolescent fled to western mountains of The Land of Earth. Somewhere near Gaipan Village, in a cave warmer than the rest, he met Kiachi Ashihama and was taken under his wing. Here he was taught how to spot liars, poisoned food, ambushes, and all the other things for which Kiachi Ashihama chose his hermitage. Many years and Ashihama passed and Rongo stayed at the cave, practicing his sword forms and his mastery of fire until the Imperial Order swept through his hills en masse. Rongo joined their masses in body, but not spirit, blending into their ranks unnoticed in their numbers until he reached the scene of the Southern Air Temple. There he ran to the woods and defected to the Lotus Alliance, whose philosophies he found less invasive. In Session 20 he stood trial to ensure that he would be loyal to the Alliance. He would later be assigned as the new firebender for the Champions of the White Lotus. 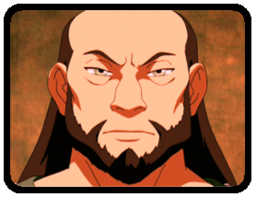